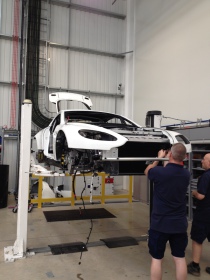 Donington Park, England- October 27th, 2015: Development continued on the 2016 upgrades from Prodrive for the latest version of Aston Martin's Vantage GT4 with Dillon Battistini at the wheel. Battistini, who has carried out most of the driving duties for the development program, logged his fourth day in the car working with staff from the Prodrive outfit.

Said Dillon: "It has been a great experience for me to work closely with the factory Prodrive team and help with their development work. I'd like to thank them, and Macmillan Racing who own the car for entrusting me with this job. I've very much enjoyed driving the Aston Martin Vantage GT4 and am excited about what the future holds as I look to push ahead with my career in sportscar racing."

Paul Ricard, France- April 3rd, 2014: Accomplished open-wheel race car driver, Dillon Battistini, added to his successful resume after spending two days with Murphy Prototypes as part of the team driving their Oreca 03 Nissan LMP2 at the official European Le Mans Series Test at Paul Ricard.  Greg Murphy who invited Dillon had this to say: “We were delighted that Dillon decided to join us at Paul Ricard. He impressed us hugely with his speed, professionalism and feedback. Despite not having driven recently, Dillon showed his speed straight away and we believe that Dillon has all of the qualities required to be a top Sportscar driver.”  Dillon thoroughly enjoyed the opportunity to experience a top-line LMP2 Race Car. “I really enjoyed my test with the Murphy Prototypes team in their Oreca-Nissan LMP2 car. It felt fantastic to get behind the wheel and reacclimatize after some time away from driving. I was mega-impressed with the standard of preparation and competitiveness of the car.    Hopefully it will be possible to put a program together to race in the ELMS this season and I'm sure that Greg Murphy's team would provide me with the tools needed to show my potential and fight for the championship in what looks to be a very hotly contested series in 2014.” 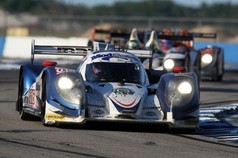 POUGHKEEPSIE, NY May 2, 2012 - Accomplished open-wheel race car driver, Dillon Battistini, added to his successful resume with a recent test at Sebring in Dyson Racing's Lola B12/66- Mazda. "He did 40 laps across a series of varying conditions, so he could see the way the car changed and so we could judge his feedback. We were all very impressed with his pace and methodical approach," noted Chris Dyson, Vice President of Dyson Racing and reigning ALMS champion.﻿

Dillon enjoyed the opportunity to experience a top-line prototype race car. "I met Guy Smith at the IndyCar event at Long Beach last year," recounted Battistini. "It was the first time I had seen him since I raced him in go-karts in 1991. He said he thought I would love sports cars and I decided I would give it a try. I spoke to Chris Dyson and when he offered me the chance to try the team's new LMP1 Lola at Sebring, I jumped at the opportunity. I was really impressed with the car's performance. The acceleration and downforce were impressive and the carbon brakes were phenomenal. I very much enjoyed driving it and it was a pleasure to work with such a professional team. I think that endurance racing is entering an exciting period, particularly with the reintroduction of the World Endurance Championship and the various manufacturers coming in. I am looking at my options to do some sports car races in addition to the IndyCar program I am working on for later this year." 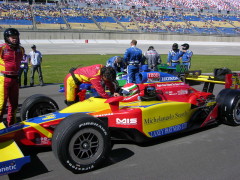 SPARTA, Kentucky- October 2nd, 2011- Dillon Battistini had an early end to his race today after a positive start in which he took the green flag in 25th position and had his first wheel-to-wheel fight with 28 other IZOD Indycar competitors as he made his series debut at the Kentucky Indy 300. Battistini, who had been feeling ill for a few days leading up to the event this weekend, held on for 124 laps at the 1.5-mile D-shaped oval but eventually decided to retire from the race as he felt it was no longer safe to continue clocking laps in excess of 210mph. The British rookie was scored in 28th position for the second to last race of the 2011 IZOD Indycar Series season.

Despite the unfortunate outcome, for Battistini this race marked a milestone in his career as he completed his climb through the Road to Indy program which took him from winning races in the Firestone Indy Lights series, including the event at Kentucky, to getting behind the wheel of an Indycar.

"My performance was blunted by factors beyond my control this weekend including losing set-up time with a steering issue during practice, which led to having handling problems in the race, but making my Indycar race debut still represents a big breakthough for my career. I have gained invaluable experience which can be applied in the future and next time I should be able to show what I am capable of."﻿﻿ 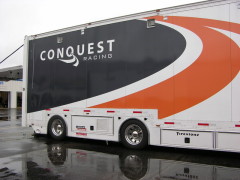 INDIANAPOLIS, Indiana – September 29th, 2011 – Conquest Racing announced today that Dillon Battistini will join the team as the driver of the #34 car this weekend at Kentucky Speedway for the Kentucky Indy 300, the penultimate round of the 2011 IZOD IndyCar Series Season.  The rookie driver, coached by the Conquest Racing crew, successfully completed his rookie oval test last weekend at the same track and is now ready to make his debut alongside the stars of series.

The British driver is a testament of the Road to Indy program as he's moved up through the ranks after making a name for himself in 2008 when he became a four-time winner in the Firestone Indy Lights Series, including a commanding win from pole at the Freedom 100, the year's most important event. He is also the 2007 Asian Formula 3 Champion and now he will have the chance to showcase his talent in the fastest open-wheel cars in the world. The 300 mile event will feature a record-starting field of 29 cars as the season winds down and the teams try to make the most of the last two races ever for the Dallara Chassis.

Activities for the Kentucky Indy 300 will begin Saturday October 1st with practice and qualifying, and the race will be broadcasted LIVE on October 2 through VERSUS at 2:00 PM ET.

"I thoroughly enjoyed being back at the wheel of an Indycar for my rookie oval test last Friday. It felt great to get up to speed after being on the sidelines for a while. I'm relishing the opportunity to make an impression on the Indycar stage at Kentucky Speedway this weekend, and can't express enough gratitude to my various backers and also to Eric Bachelart at Conquest Racing for doing everything possible to turn my long-held dream of racing an Indycar into a reality."﻿﻿